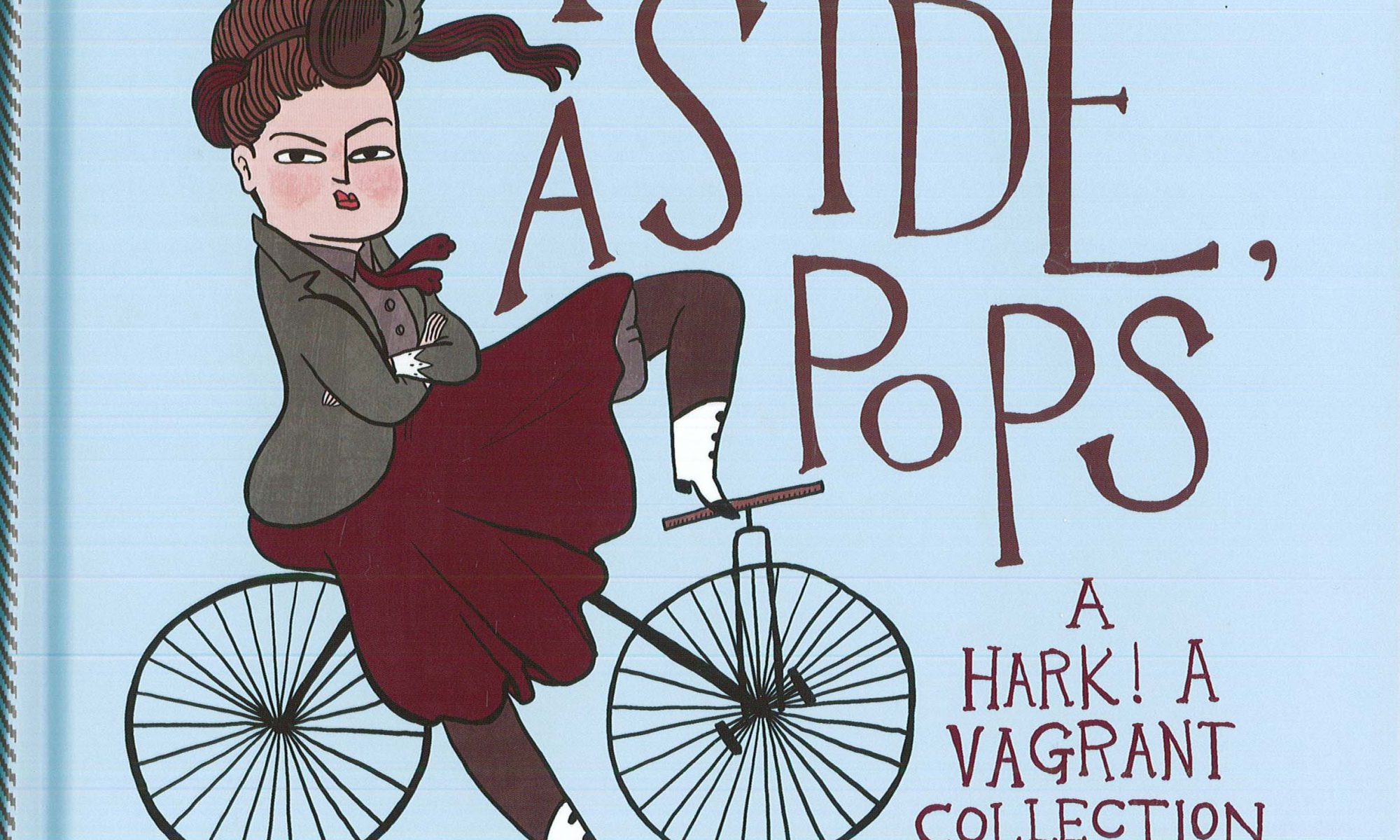 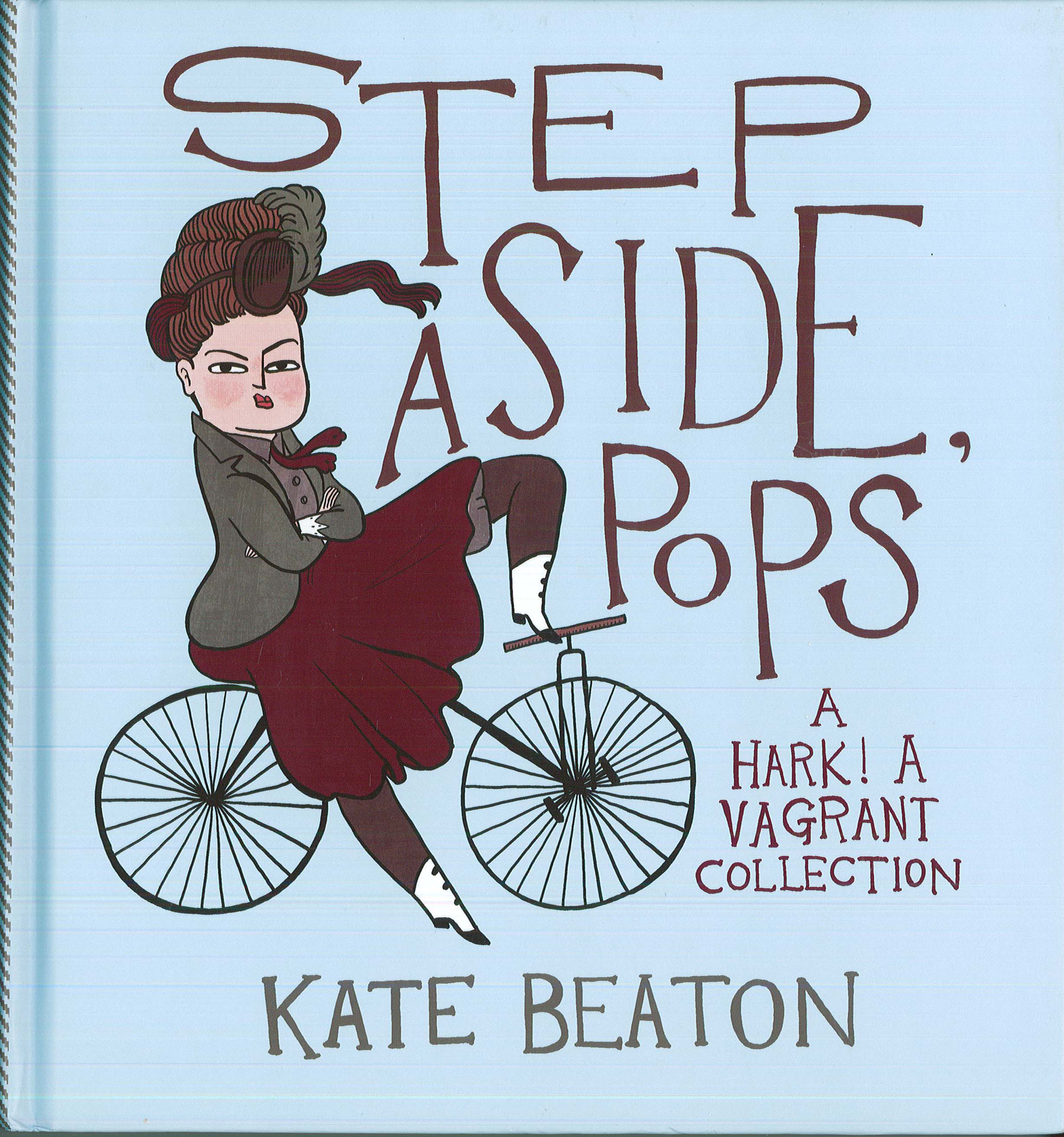 This review first appeared in the community blog section of the “Elkhart Truth’ in late February/early March of 2016. I’m resurrecting this review now because Kate Beaton is a transatlantic artistic soulmate of French cartoonist Penelope Bagieu, author and illustrator of “Brazen: Rebel Ladies Who Rocked the World,’ which I’ll be reviewing in August.

I highly recommend stopping by Better World Books on 215 S. Main St. in Goshen to pick up a copy of your own and get a head start. If you like the title and the cover, you won’t be disappointed!

(Thanks to Better World Books in Goshen, for providing me with books to review. You can find all of the books I review at the store.)

Comics collections don’t tend to include an index, but Kate Beaton is not your typical comics artist. Here’s an excerpt from the Bs at the back of her most recent collection, ‘Step Aside, Pops’:

This former history and anthropology major does her research on figures both pop and historical—“I don’t make things up!” she said to an interviewer for Bitch magazine. But Beaton also doesn’t let the precision of her research deter her from tossing her index into a blender, infusing the Battle of Ridgeway with a touch of Batman and Bieber. Under the influence of Beaton’s pen, a fourteenth-century figure like Edward the Black Prince maintains his historical accuracy, but morphs into a preening twenty-first century teen: 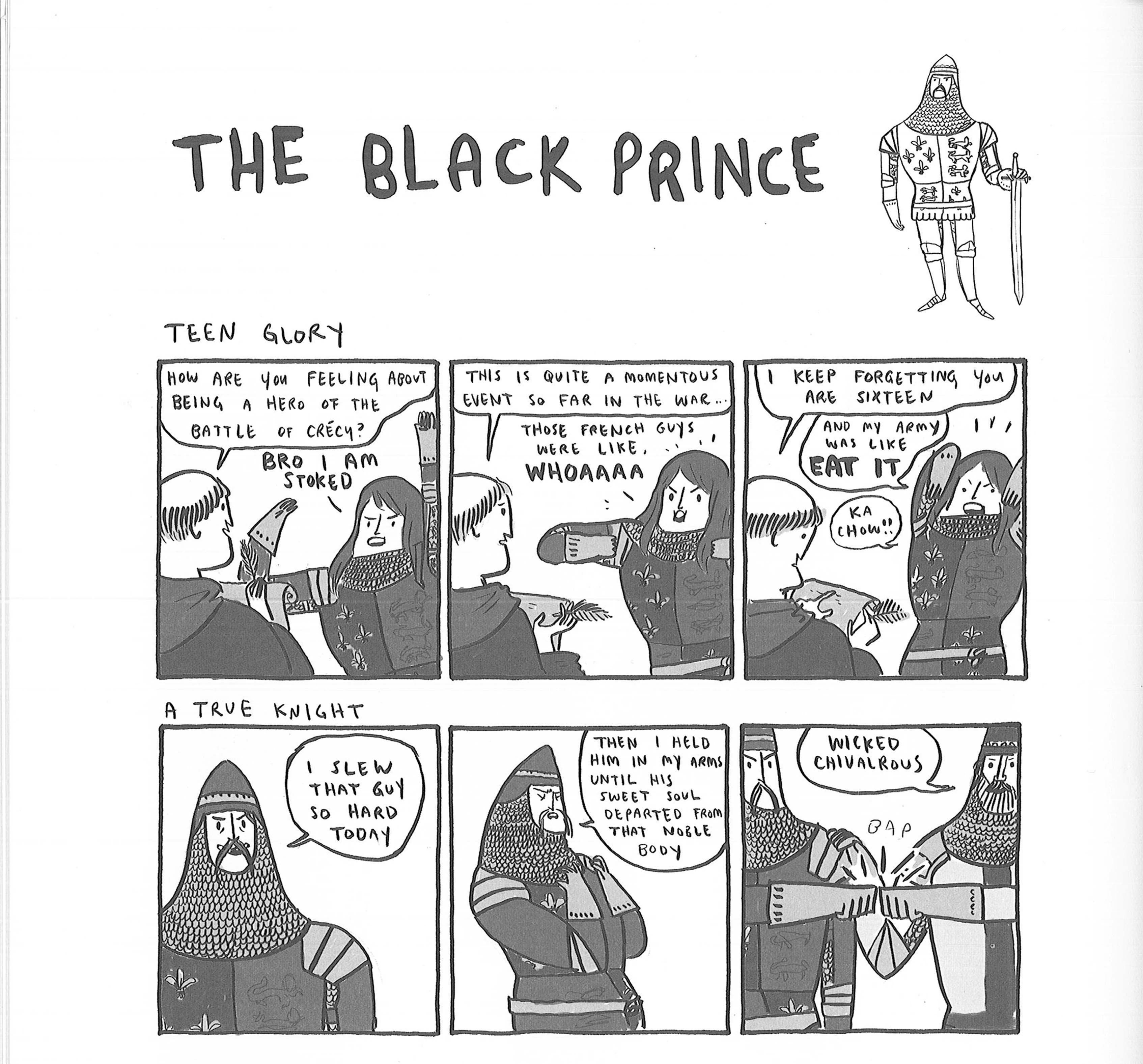 Be forewarned, however: Beaton’s work is not for kids. It’s smart and educational, and may encourage you to look up historical figures from Georges Danton to Tom Longboat to understand the nuances of her already funny jokes. But the humor is definitely for adults, especially since the source of the joke is often feeding unsavory punchlines to unexpected characters: “This sh*%’s gonna be a trip!” says Nelly Dean from ‘Wuthering Heights,’ as she passes a joint and begins to tell her story.

Ever modest, Beaton, who started posting her strips right at the start of the webcomics boom in 2007, chalks up her success to luck rather than talent, claiming that she rode the wave of the early days of online comics to her first, self-published print collection, ‘Never Learn Anything from History’ in 2009.

Now that she has been interviewed by Lev Grossman for ‘Time’ magazine, has won the Harvey award for best cartoonist (the gold standard honor of the comic book industry), and appears regularly in ‘The New Yorker,’ her success is clearly more than luck. How many other cartoonists can shift registers so smoothly and expertly, jumping from Superman as a whiny and insecure drag on the talented career woman Lois Lane, to a Julius Caesar who wears gladiator p.j.s, under his armor? And she certainly isn’t afraid to skewer the very industry that has been showering her with accolades:

‘Step Aside, Pops,’ released last fall, also shows Beaton working to diversify her subjects, which can be tricky when it comes to humor. As she explained to an interviewer from the UK’s ‘Independent,’ she was at first reluctant to make a “silly” comic about one of her newest idols, journalist and early civil rights activist Ida B. Wells. “You don’t want to make fun of people who were genuine heroes, whose life was hard, who struggled against injustice,” she explained, “so you construct a punchline that skewers the society that failed them. But for a while I left those types of figures out because I didn’t want to be seen to be making fun … but then you’re only making comics about the powerful white guys.” 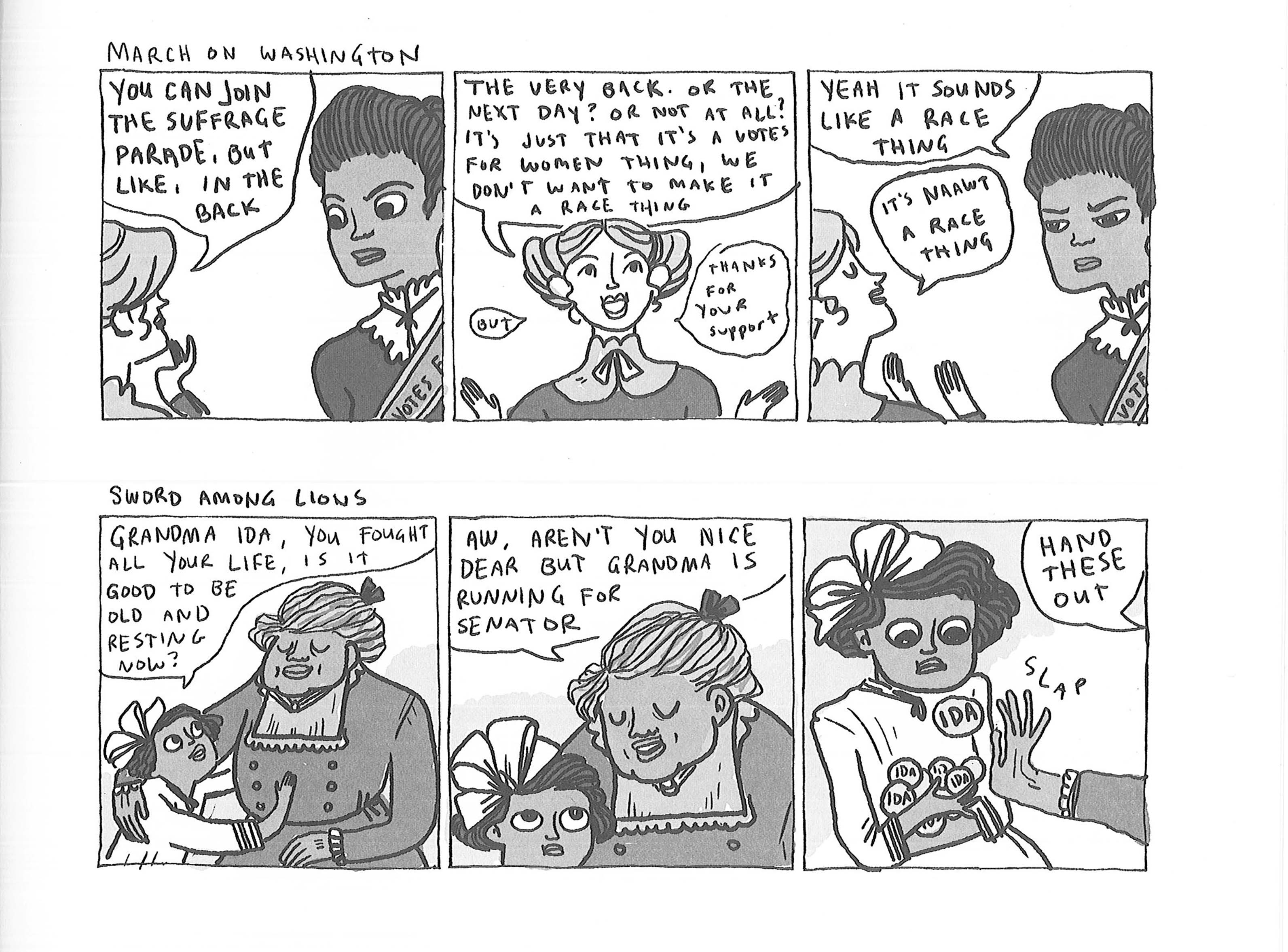 The pacing of Beaton’s jokes is so tight and effective that her work could easily become formulaic, yet she keeps challenging herself. She’s currently experimenting with a longer piece called ‘Ducks,’ a graphic memoir about working at a tar sands oil extraction site to pay off her student loans. “‘Ducks’ is about a lot of things,” she writes on her website, “and among these, it is about environmental destruction in an environment that includes humans.” Her phrasing here illustrates another secret of her comics: she can humanize almost any character, but without skirting crucial and pointed social critique.

“What makes historical figures good vehicles to address such current issues?” asked an interviewer for ‘Entertainment Weekly’ last September. “Because the nature of humanity doesn’t really change,” Beaton answered without missing a beat. If ‘Step Aside, Pops’ comes across as silly, light fare, you’re not reading carefully enough. Kate Beaton may only be in her thirties, but she’s already an artist wise beyond her years.